"I am passionate about stopping fractures and saving lives." 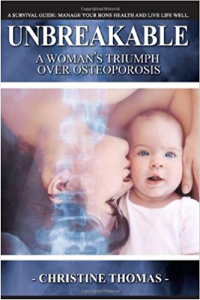 About the Author
Christine is a nationally recognized author and speaker in Canada. She uses her valuable communication skills as a passionate advocate for better bone health around the world. She is relentless at educating others on the prevention and management of this potentially debilitating disease. She is on the Osteoporosis Canada Board of Directors, has won numerous awards and is often seen in the Canadian media delivering her message with the kind of conviction learned only through hard experience.

Christine is a member of the Osteoporosis Canada Board of Directors, the Scientific Advisory Council Research Committee and the Canadian Osteoporosis Patent Network Executive Committee.

She is a recognized expert in living well with Osteoporosis and her purpose is to raise awareness for people of all ages to take care of their bones. Christine inspires and provides hope for those suffering from the effects of Osteoporosis..

Christine was the recipient of the Eleanor Mills Inspiration Award in 2007 which  honours an Osteoporosis Canada special volunteer who, like the late Patron, Eleanor, has embraced her own osteoporosis, and by doing so has inspired others with her determination, perseverance and optimism, and has given of herself to champion the osteoporosis cause.  Further, Christine is seen as an inspiring positive role model who leads by example, providing hope, encouragement and support to all.

Christine found her second calling when she broke her back, literally. In 2002, the high-flying mediator had everything and was going home with her new baby. Shortly after, Christine had a minor fall at home and found herself in excruciating pain. The diagnosis–five spinal fractures– the result of severe Osteoporosis. She was only 42.

While her government career was over, the determination that had taken her there was not. She went looking for more information. What she found was a small group of motivated women who wanted to raise awareness for Osteoporosis. “With an Executive MBA from Queen’s University, I knew I had skills to offer, and now I had the personal motivation to contribute.” She became their leader and led the thriving chapter of 10 executives for more than seven years and raised more than $100,000.

Christine has channeled her skills into becoming a champion for getting the message out about Osteoporosis. Her experience has made her a strong advocate. She takes full advantage of living in our nation’s capital by making herself a noted fixture on Parliament Hill. Armed with scientific evidence and her personal story, Christine advocated strongly for the successful adoption of the Ontario Osteoporosis Strategy.

“Although I am younger than many people who get this disease, I have experienced many of the challenges and lows that come with Osteoporosis. I share my story to encourage others to talk to their physician and take the necessary steps to prevent broken bones and manage this disease.”

“She is passionate about educating people about osteoporosis, and through her actions, she provides hope, encouragement and inspiration to all. We know, writes her chapter, we’ve seen it!”

Christine lives in Ottawa, Canada and is a dedicated Mom to her daughter, Chanel and loving wife to her husband Gerry. Christine is an inspiration, a phenomena and above all passionate about building better bones in North America and around the world! 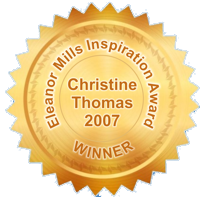 Are You At Risk
for
Osteoporosis?

Crack! in 2001 Christine Thomas bent over to pick up her newborn daugher in her crib and fractured her spine in several places.

Months later, she would be diagnosed with osteoporosis.
Tweets